Skip to content
A dark ‘Basingstoke’ tale for the longest night

A dark ‘Basingstoke’ tale for the longest night

Tomorrow is the winter solstice, with only seven hours, 49 minutes and 41 seconds of daylight. That’s almost nine hours less than the year’s longest day in the summer.

These longer, darker nights not only create the perfect atmospheric for chilling tales, they’re a fine excuse for watching more telly!

Here at Brevity Marketing, we recommend catching up on the sinister three-part drama recently shown on BBC One, Rillington Place. Tarantino favourite Tim Roth plays serial killer, Reginald John Christie, brilliantly. Christie killed at least 8 women – including his own wife – over a 10-year period in London during the 1940s and 1950s.

Christie was eventually caught and hanged on 15 July 1953, despite pleading “not guilty by reason of insanity”. 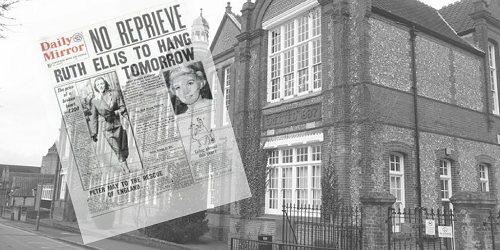 Three years earlier, Timothy Evans, Christie’s upstairs neighbour at 10 Rillington Place, had been hanged for the murder of his wife Beryl and their baby daughter Geraldine – and Christie was the chief witness for the prosecution.

When, during his own trial, Christie confessed that is was actually him who had strangled Beryl, the bungled case against Evans became a significant plank in the campaign against capital punishment.

The death penalty for murder was abolished in England in 1965. Timothy Evans was granted a posthumous royal pardon in 1966, but his conviction has yet to be formally quashed.

Did you know that Ruth Ellis, the final female to be executed by hanging, was from Basingstoke?

Ellis attended Fairfields Senior Girls’ School in Basingstoke, leaving at 14 to work as a waitress. Shortly afterwards in 1941, at the height of the blitz, the family moved to London. She was then drawn into the world of nightclub hostessing, spiralling into a chaotic life of brief relationships with upper class night-clubbers and celebrities.

One of these relationships was with David Blakely, a man already engaged to another woman. After a time, Ellis started seeing other people but the relationship with Blakely continued.

On Easter Sunday in 1955, Ellis shot Blakely dead outside The Magdala public house in Hampstead, and immediately gave herself up to the police. At her trial, she took full responsibility for the murder; and her courtesy and composure, both in court and in the cells, was noted in the press. She was hanged at HM Prison Holloway.

Was Ruth Ellis the victim of a cruel boyfriend who abused her and a cruel legal system that hanged her, or did she kill with the jealous fury of a woman scorned? The real story will always be as mysterious as the darkest midwinter night.